Are spray bottles an effective training aid in correcting bad behavior or do they do more harm than good? We’ll discuss this controversial subject and give the pros and cons of each side. 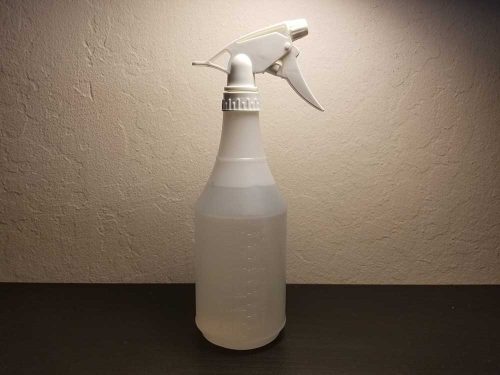 To spray or not to spray, that is the question countless cat parents have been confronted with since the dawn of time. Opponents of spray bottles say they’re cruel and induce fear and aggression in our cats. Proponents swear their allegiance to them and say they could never live without them. Which side of the debate are you on? Who’s right and who’s wrong? Could they both be right and wrong at the same time? Let’s try to get to the bottom of this debate.

Cons to Using Spray Bottles on Your Cat

Those against the act of spraying water at their cats will make the claim that using fear to get their cats to obey them is cruel and promotes fear and aggression, similar to spanking a child except that a stream of water sprayed on one’s backside is nowhere near as painful as a whack on the butt with an extension cord, something I can personally attest to.

Felinebehaviorsolutions.com has a great article explaining why spraying your cat is a bad idea.

Why spraying a cat is bad

Ok so number 1 up there is possible if you have a job and aren’t around all the time. That makes sense. But if you are home all day then number 1 is moot because you will always be around to spray kitty when he does something to piss you off.

Number 2 makes sense too, but won’t that same cat think you’re being mean when they’re begging you for treats and you don’t give them treats?  Or how about when you’re in the bathroom and they’re meowing at the top of their lungs begging to be let in and you don’t let them in because you want some damn privacy for 5 minutes out of your day? Do they think you’re being mean then? I wonder.

Number 3 also makes sense, but then again, considering we’re roughly 20 times larger than all but the fattest house cats, doesn’t it make sense for them to fear us just a tad? I know if I lived with a creature 20 times my size they’d scare the hell out of me no matter how many tummy rubs they gave me.

And now for the pros.

Pros to Using Spray Bottles on Your Cats

Those who are on the pro side to praying their cats will argue that it is an effective quick fix solution. Archiecat.com has a great article explaining this in more detail. They go on to say that while spraying is an immediate deterrent to bad behavior, you still have to get to the root cause of bad behavior. A quick fix spray alone will not solve your long term problems. And let us all agree that you never ever spray a cat in the face. Ever.

Why spraying a cat is good

Ok so I could only find two reasons given by those advocating the spraying of cats. Spraying a cat is a good quick fix but will not solve anything in the long term and truth be told, if my two cats who also happen to be brothers were to get in a really bad fight, as they have done in the past when they first arrived here, I would not hesitate to use a spray bottle to break them up spraying to the side of them or towards their back side.

So is Spraying Your Cat Right or Wrong

I think both sides are right to some degree. Spraying the you know what out of your cat in his face all the time for anything that annoys you is a definite no no and will definitely lead to distrust between you and your cat. This will promote all kinds of bad juju and this kind of spraying should never be employed no matter how tempting it may be for a quick fix.

The only way to solve long term behavioral issues is to find the root cause of the problem and use positive reinforcement to deter this behavior. And never ever spray your cat in his face. Got it?

As a short term quick fix solution, I could see a spray bottle as a last resort type of discipline if it means saving them from physical harm. If you’re an older person and moving around doesn’t come easy for you, then yes, a spray bottle to break up a fight between two cats may be the only option you have. Just remember if you must spray, spray around them, and once the fight is over, stop spraying. Never spray out of anger. This will only lead you down the path of the dark side, from which you will never return. Remember, short term quick fix last resort, yes. Long term solve your problems forever, no

Remember, there is no such thing as a quick fix. Solving your cats behavioral issues will take a lot of work and positive reinforcement on your part. A spray bottle will never solve your problems unless it’s something done as a last resort to prevent physical injury to your cat and you have no other alternative. Just don’t get lazy and use it as a fix for all your problems because this will only lead to more problems and more spraying on your part. It’s a never ending cycle of bad juju all around. Got it? Ok so spraying bad most of the time and spraying good a very small tiny percentage of the time but only as a last resort. Of course these are only recommendations and you and you alone will have to decide for yourself. Godspeed my friends and good luck.

CoolKittyCondos is a cat lifestyle site dedicated to enhancing the physical and mental well being of our feline friends.

The smell of cat litter in a small apartment is disgusting and can have adverse effects on thos ...

Your cats litter box won’t last forever. It will eventually need to be replaced. We’ll go over ...

Here are 7 space saving locations to place your cats litter box in a small apartment or living ...